Why You Should (maybe) Stop Playing At PokerStars

by Gamblista
in News & Opinion, Poker
0

OK – Don’t get too excited gamblista hasn’t turned into one of those bitter donk jokerstars hating sites just yet. I’m not about to post a handful of ridonkulous play money bad beats as if it’s proof pokerstars is rigged or (insert any other poker site name) has a action flop RNG.

However this is an appeal to anyone playing cash games at PokerStars that they would be crazy not to take their action to better, looser, juicier and easier to win sites – Do it NOW damn you.

Frankly, if your a winning, losing or break even cash game player the from my simple observations you must be certifiable to want to stay playing in PokerStars ring games.

This is 2013 people – “The poker games have got tighter everywhere” is what people will tell you all the time, that’s true enough but it’s still relative and some sites like PokerStars have always had tougher games.

Now more than ever before, it is vital to go where the looser, easier money is. So just stop making life difficult (and a lot less profitable) for yourself – Sign-up and get playing at one of our other recommended, much looser and easier to win at sites like ones shown below.

Not convinced yet ? See the evidence for yourself below –

Basically for the first comparison I simply took screenshots showing the games available (excluding full tables) at 0.05/0.10 stakes with a minimum of 7 players each site within the same 15 minutes on Tuesday 2nd July,2013.

This way it’s possible to crudely compare the number of potential games, % to the flop and the average pot values on offer at each of the “tested” sites which were PokerStars, Full Tilt, 888poker & ipoker network (like Titan Poker). 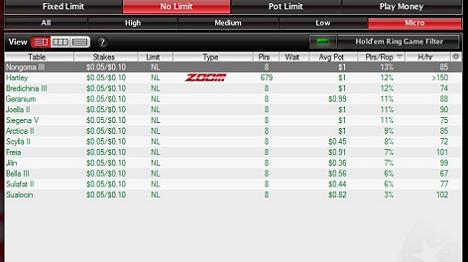 Basically PokerStars have the tightest, nittiest and least juicy tables online. As a result it also has pretty small pot sizes. If your playing on Stars then your basically just sitting their with nitty players, slowly all raking yourselves to death, with very little upside – That is pointless.

To be fair to iPoker they have always had more focus on 6 max short handed tables than they have on full tables and at the full tables they have games with flop % rates generally over 20%.

This indicates even Full Tilt (not previously renown for easy games) has significantly looser tables available than PokerStars.

888poker is considered the loosest, easiest to win and has the most bloated pots of all the above sites. While the test didn’t show that to the full extent my previous experiences have indicated there were tables with 30% to the flop rates and average pots as big as $2.15 which is hugely better than PokerStars.

So Full Tilt and 888 Poker were offering tables with pots twice the size and twice the % to the flop meaning you had much more chance of getting action when you had a hand and more chance of building a pot when drawing.

On the face of it the ideal thing would be to count all the games running including the full tables as this would “truly reflect” the total balance of games going on, I have included a summary of these in the second test and combined them with available table data as well. At the end of the day really what is important is comparing the available tables at sites to give you a rough idea if other sites offer better potential profitable games than PokerStars.

At PokerStars there was a total of 102 full games running

At Full Tilt there were 18 games running

At 888Poker there were 21 games running between 7-9 players (they don’t show full tables).

While it would be good to conduct this test several times the results are pretty clear even from this small sample test, that my gut instinct is correct.

PokerStars is in fact just about the worst place to play cash games, with generally the lowest % to the flop rates and the smallest pots around.

Purely from a potential profit standpoint – DONT PLAY AT POKERSTARS

Lets be honest why else other than hoping to profit are you playing cash games ?

Nobody should like the software enough at a site to want to play in a less profitable game.

Surprisingly in this test while 888poker was the loosest and had bigger pots, it did not come out as the total stand out loosest site to play or the one with the most bloated pots. Although players cannot easily see the full table data, I think it would conclusively demonstrate 888poker does have the highest percentages to the flop and pot sizes.

Even so it’s tables are roughly twice as loose as pokerstars and the average pots are also generally about twice the size as well offering a lot more potential to get paid off from good hands and good solid play as well as taking advantage of a lot more loose action and easy money.

The “surprise” contender is Full Tilt (PokerStars sister site) who actually managed to score similarly highly to 888poker when compared to PokerStars. So there is an easy option for Stars players – segregate your playing with tournaments on Stars and cash games on Full Tilt.

If you are a cash game player at PokerStars and you take away nothing more than the suggestion to play your cash games over at Full Tilt then my job is done.

But I strongly suggest you look around other good sized and reliable sites rather than become institutionalised in the PokerStars ring game lobby – there is a whole new world out there of looser, easier to win poker games with bigger pots begging to be taken down and players willing to pay you off when you get those big hands. Don’t become one of those tight as a rock grinding players on Stars you should be trying to avoid.

As I said at the start I’m not bashing Stars, while this may have shown that it’s not the best site for easy to win cash games it IS undoubtedly the biggest and best site for multi-table tournaments, satelites and qualifiers.

1. a connoisseur of gambling and the gamblers lifestyle.
2. a discerning gambler with a taste for high class gambling

888 Casino Review 888 Casino has been providing customers with an excellent casino experience. They are a fully licensed and regulated casino with the best ... read more

888 Poker Review That 888Poker offers some of the most fish filled games online should be reason enough to play there, but it has also grown massively over ... read more

888 Sport Review 888 Sports has been providing gamblers with an excellent betting experience for years. They are a fully licensed and regulated UK betting site ... read more

888 Ladies Bingo Review 888Ladies is an online bingo site marketed somewhat stereotypically towards women gamblers, as most online bingo generally is, but it is... read more

© 2020 Gamblista.com - for the Discerning Gambler.

This website uses cookies to improve your experience while you navigate through the website. Out of these, the cookies that are categorized as necessary are stored on your browser as they are essential for the working of basic functionalities of the website. We also use third-party cookies that help us analyze and understand how you use this website. These cookies will be stored in your browser only with your consent. You also have the option to opt-out of these cookies. But opting out of some of these cookies may affect your browsing experience.
Necessary Always Enabled
Necessary cookies are absolutely essential for the website to function properly. This category only includes cookies that ensures basic functionalities and security features of the website. These cookies do not store any personal information.
Non-necessary
Any cookies that may not be particularly necessary for the website to function and is used specifically to collect user personal data via analytics, ads, other embedded contents are termed as non-necessary cookies. It is mandatory to procure user consent prior to running these cookies on your website.
SAVE & ACCEPT